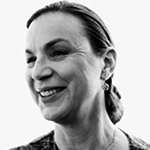 Victoria Vesna, Ph.D., is a media artist and Professor at the UCLA Department of Design | Media Arts and Director of the Art|Sci center at the School of the Arts and California Nanosystems Institute (CNSI). She is currently a senior researcher at IMéRA – Institut Méditerranéen de Recherches Avancées in Marseille (2011-2013). Her work can be defined as experimental creative research that resides between disciplines and technologies. With her installations she explores how communication technologies affect collective behavior and how perceptions of identity shift in relation to scientific innovation. Victoria has exhibited her work in over twenty solo exhibitions, more than seventy group shows, has been published in excess of twenty papers and gave 100+ invited talks in the last decade. She is the North American editor of AI & Society and in 2007 published an edited volume - Database Aesthetics: Art in the age of Information Overflow, Minnesota Press and most recently an edited volume entitled Context Providers: Conditions of Meaning in Media Arts. (co-edited with Christiane Paul and Margot Lovejoy). Intellect Press, 2011. 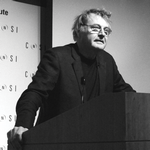 Jim Gimzewski is a Distinguished Professor of Chemistry at the University of California, Los Angeles; Director of the Nano & Pico Characterization Core Facility of the California NanoSystems Institute; Scientific Director of the Art|Sci Center and Principal Investigator and Satellites Co-Director of the WPI Center for Materials NanoArchitectonics (MANA) in Japan. Prior to joining the UCLA faculty, he was a group leader at IBM Zurich Research Laboratory, where he research in nanoscale science and technology for more than 18 years. Dr. Gimzewski pioneered research on mechanical and electrical contacts with single atoms and molecules using scanning tunneling microscopy (STM) and was one of the first persons to image molecules with STM. His accomplishments include the first STM-based fabrication of molecular suprastructures at room temperature using mechanical forces to push molecules across surfaces, the discovery of single molecule rotors and the development of new micromechanical sensors based on nanotechnology, which explore ultimate limits of sensitivity and measurement. This approach was recently used to convert biochemical recognition into Nanomechanics. His current interests are in the nanomechanics of cells and bacteria where he collaborates with the UCLA Medical and Dental Schools. He is involved in projects that range from the operation of X-rays, ions and nuclear fusion using pyroelectric crystals, direct deposition of carbon nanotubes and single molecule DNA profiling. Dr. Gimzewski is also involved in numerous art-science collaborative projects that have been exhibited in museums throughout the world. 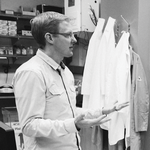 Adam Stieg serves as Director for the Sci|Art NanoLab Summer Institute. As a scientist and educator at the California NanoSystems Institute (CNSI), his work focuses on developing integrated approaches to study material systems at the interface of traditional boundaries. Through the implementation of original experimental techniques, this research seeks to bridge the gap between our current understanding of nanomaterials and their fundamental properties with how these systems tend toward complexity at increased scales of space and time. Dr. Stieg's research activities are augmented by active collaboration with artists and designers on various projects, installations, and public exhibitions that directly inform the scientific process and provide motivation to develop new educational content that conveys the need for creativity in innovation. 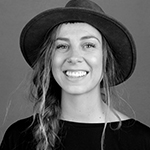 Kaitlin Bryson is an interdisciplinary artist merging bioremediation – the use of biological materials to clean harmful toxins from the environment – with sculpture, performance, fiber arts, video and installation. Her interests lie with the possibilities that science affords us, especially for ecological renewal, but her passion and compassion lie within the realms of poetry, magic, and healing. Bryson is particularly fascinated by the world of fungi and focuses her art practice on working with and developing relationships with these incredible organisms. Fungi silently and ordinarily inhabit this world as both makers and caretakers. Their biochemical processes and lifestyles are fundamental, terrestrial miracles which unfold as interconnected performances that nourish land, remediate toxins, and terraform the un-formable. In working with fungi and illuminating these potentials, Bryson is also interested in terraforming new types of stores: stories that dismiss common narratives about destruction and disaster as catastrophic ends turning humans against one another and the environment, and instead look to these places of precarity and entropy as fertile grounds for collectively inspired adaptations. Bryson received an MFA in Art and Ecology from the University of New Mexico, and a BFA from the University of Nevada, Reno. Her work has been shown internationally and she is currently working on sculptural remediation projects in New Mexico and Mexico. 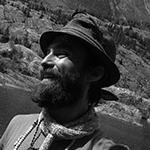 Mick Lorusso started his art|science journey as a teenage apprentice to a Hopi Kachina sculptor and a summer intern at a biochemistry lab researching yeast for bioremediation. In his projects he interweaves musings on molecules, cells, societies, and environments. He creates images, cabinets of curiosity and interactions to address questions about energy, water, climate, and health. He has been a resident artist at interdisciplinary art programs, including PLAND / ISEA 2012: Machine Wilderness (Taos, NM, USA), the 2016 Rauschenberg Rising Waters Confab (Captiva, FL, USA), and Matza Aletsch 2017 in the Swiss Alps. At a residency in Schöppingen, Germany, Lorusso harnessed electricity-producing bacteria to illuminate a sculptural village, Microbial Schöppingen, which received a hybrid art honorary mention at Ars Electronica 2013. With early training in microbiology and education in art at Colorado College (BA) and San Francisco Art Institute (MFA), he has been a member of the UCLA Art|Sci Collective and instructor for the Sci|Art Nanolab since 2014. He is a graduate of the Waag Biohack Academy, and is a member of the Mexican interdisciplinary cooperative XOCIARTEK. He is currently a STEAM educator with Genesis in Los Angeles. 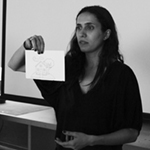 Clarissa Ribeiro, Ph.D., is an Architect, Media Artist, and Researcher, teaching experimental design strategies in Architecture for first and final year students in Brazil, where she is the director of the CrossLab, at the University of Fortaleza. As an independent artist, she has been producing and exhibiting experimental interactive installations exploring complex affectiveness through macroscale metaphorical translations of subatomic scale phenomena. Working in collaboration with other artists, research groups and art collectives in her home country, Brazil, and abroad, she has been exhibiting and presenting her works and ideas in several countries in important symposiums and conferences, weaving a dialogue with an international community that produces and discusses critically cutting edge perspectives in media arts and sciences. Her artistic practice is viscerally linked to her research interests that, for the last 20 years, have been focused in investigating and understanding the influences, connections and cross contaminations between the sciences of complexity – cybernetic, information theory, systems theory – and artistic expressions and poetics in media arts. This effort implies the construction of a perspective that allows observing the complex observer-observation – the artist and his/her object; it is a strategy of integrating the self-observation to a system that is the creative process itself. From 2014 to 2015 she was an Associate Professor for Roy Ascott Studio in Shanghai, China. Recently, from 2013 to 2014, she was awarded a Fulbright grant in Arts, and was living in Los Angeles, California, as a Postdoctoral Research Scholar, connected to the UCLA Art| Sci Center and Lab. During her Ph.D. in Visual Arts by the University of Sao Paulo, Brazil, by the time she was together with Professor Gilbertto Prado’s group, from 2006 to 2011, she was a visiting research member of the CAiiA-Hub of the Planetary Collegium, living for one year in the UK. 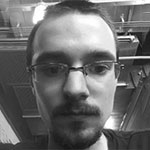 Sam Lilak is a graduate student working for Jim Gimzewski at UCLA. Sam received a B.S. in chemistry at the University of North Dakota. His undergraduate background in chemistry was primarily oriented around analytical chemistry and the specific decomposition of lignin. The graduate work he now pursues is rooted in nanomaterial development and state of the art semiconductor research. 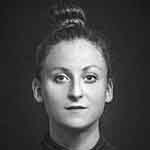 Monica C. LoCascio is a multimedia artist focusing on questions of resonance, connection, and interference, particularly within and between bodies. Her work is inspired by such topics as biophotonics, particle entanglement, memory, and the thermodynamics and non-linearity of time. She is currently in the Art & Science Masters program at Die Angewandte (University of Applied Arts) in Vienna, Austria. 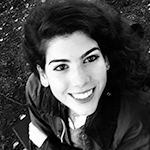 Zeynep Abes is a new media artist who got her start at LACMA’s Art+Tech lab creating AR installations. She then worked at the 2016 Sundance Film Festival's New Frontier Exhibitions and is currently studying computer animation and game development for VR and AR. 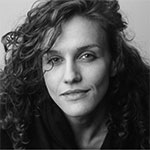 Elí Joteva is a Bulgarian-born inter-media artist and researcher currently working in Los Angeles. Her creative practice intersects a wide range of media: from temporal light and sound installations, photographic series, environmental sculptures, durational performances to community engagement projects. Joteva received a B.A. in Fine Arts from USC Roski and is currently an M.F.A candidate at UCLA Design | Media Arts, where she studies how new imaging tools and biofeedback technologies can provoke embodied reflections of internal experiences. Her work extrapolates the ephemeral realms of human perception by amplifying the invisible and inaudible processes underneath conscious awareness. Joteva’s work has been exhibited as solo shows in North America, Europe and Australia.

John Brumley is an artist and researcher based in California. John's work focuses on using mixed reality systems to promote collaboration in physical space, while engaging with digital skill sets, constant distractions, and hidden infrastructure. John has a PhD in Empowerment Informatics from the University of Tsukuba, MFA in Design Media Arts from UCLA, and BA in music from UC Davis. 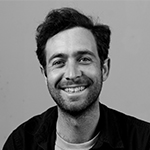 Shane Houchin is a California-born artist and musician, currently working towards a Geology degree in the department of Earth, Planetary, and Space Sciences at UCLA. His present focus is in geologic mapping, structural geology, igneous and metamorphic petrology, and tectonics. Bringing together his background in the arts with his geologic studies, Shane seeks to communicate science in aesthetic and engaging ways to foster an interest in the natural world and its dynamic systems. He has also recently completed an album of original music under the monicker Tujunga which will be released in late 2019. 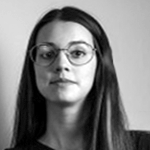 Ivana Dama studies Design Media Arts at UCLA's School of Arts and Architecture. Born and raised under a post-communist regime in Serbia, Ivana explores the infusion of technology with traditional art practices. While only a young child when the bombings began, images of the destruction still clearly permeate her mind. The memories of living in a small shelter, with the sounds of bombs and vibrations, contributed to her interests in sound and space ranging from microscopic, architectural, and satellite scale. Ivana uses the variety of media including audio visual installations, metal engraving as well as a range of open source software for creative coding. 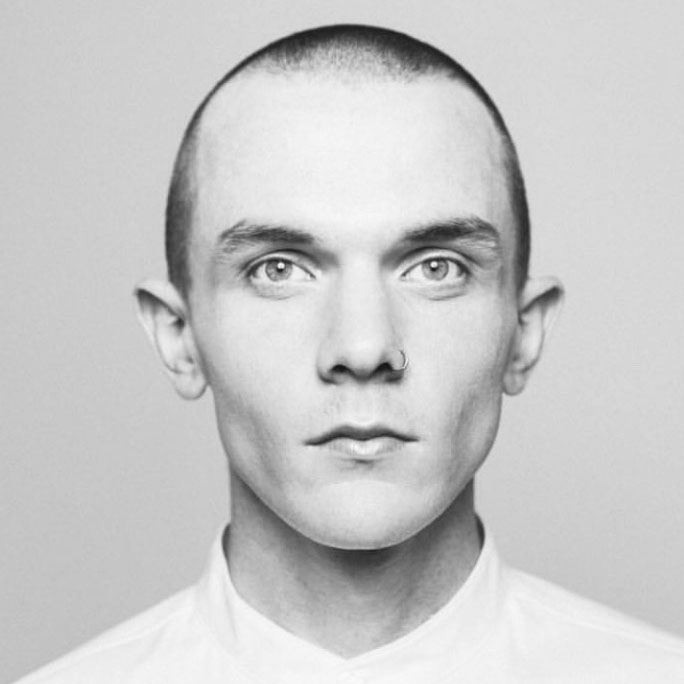 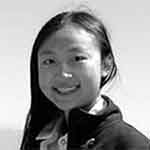 Hellen Hunag is a junior Biology major student at UCLA, with minors in Bioinformatics, Digital Humanities, Film, and Mathematics. Energetic, positive, and enterprising, she has passion in the field of natural and historical science. She enjoys a wide range of interests including traveling, research, swimming, documentary photography, hand-crafts, and furniture design.